Skin back on drivers side rear quarter

The day started by cutting out a 12" section of the wheel well at the bottom rear. I was going to wait to do this until later, but since I had a big hole in the side of the car, I decided it would be easier to reach now. That took a couple hours to get fit up, then about a half hour to weld up. As I was welding, I noticed about 3 places where the former body guy overlapped panels, so I spent about an hour cutting out lapped pieces and cleaning up the rusty areas under them.

Now that the wheel well is in good shape it was time to weld in the first of the skin patches. I started at the back by fitting up and tacking in the biggest piece. Since the piece was long and thin, I welded in 4-5 tacks, then hit them with compressed air to cool them off. I also was very careful to move around the panel as evenly as possible.

With the big piece welded in, I moved on to the arch. It was cut in two so I welded it together on the bench and ground everything down. I rolled it a couple times on the e-wheel to give it some shape and then went to fit it up... Wouldn't you know, it was about 1/8" too wide at the gap. Seeing that it was sticking at the lip, I cut the panel back in half and allowed the cut to be a bit pie shaped. That split the difference and I was happy with the fit.

Just a note... It's really hard to hammer and dolley on the arch piece. There is a close off piece at the fire wall that you can't get your hands behind. There is a gap just big enough to get a pry bar into, so I used one of those to push out on the low spots while I hammered on the skin on the high spots.

After I ground down the welds, I decided to start cutting out the trashed out engine bay. I have a lot of clean up to do, but the major sections have been cut out. I'm going to try to get some paint on the bare front end tomorrow, but if it's too wet or too cold, I will start the clean up on the engine bay supports. 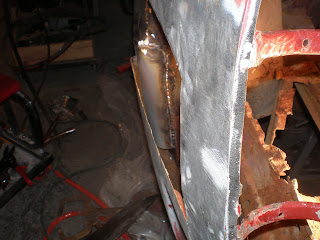 This is a view from the rear tail light on the driver's side. You can see the patch to the wheel well just inside the hole in the quarter panel. 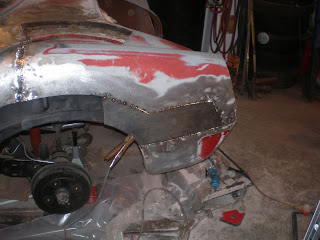 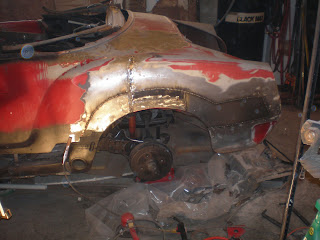 All the pieces welded in. Man, that took forever to weld. I bet there is 6 feet worth of tacks. 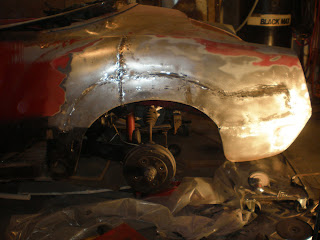 Everything ground down. MUCH nicer than the recessed and putty filled patches that were there. 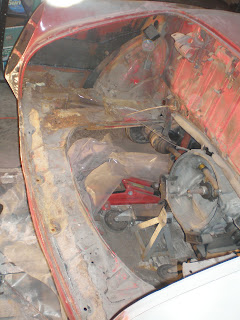 Engine bay. Can you tell it had been wrecked? 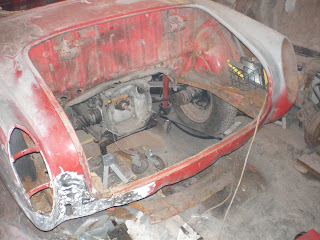