I've been neglecting the blog, so I figured I'd post up a couple vids from the last few months.  The car is back on the road and I've put over 4000 miles on it in just over a month.  I've been fixing minor issues and enjoying the spring weather.


After a 350 mile break-in on the engine, I made the decision the car was ready for a cross country adventure and I drove the car 1250 miles to a youtube car builder gathering in Daytona, Florida.  My wife just knew I was insane for even considering such a trip in a car that had barely proven it's roadworthyness.  Being the optimist that I am, I decided that I had enough skill and knowledge to fix anything that might go wrong with the 40 year old Volkswagen and threw caution to the wind...  Afterall, it wouldn't be an adventure if everything went right would it???
Posted by Greg at 5:45 AM No comments:

It's been awhile since I posted on the car because I've been putting most of my documentation efforts into my youtube channel: www.youtube.com/gregmporter

I have the hoods on, the wiring harness is 90% complete and I think I am just a couple weeks away from the first drive in decades.  I'll try to post up some detail photos here in the next couple weeks. 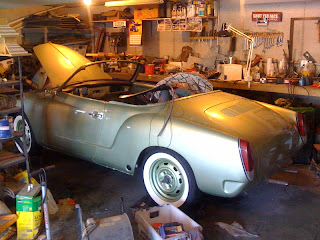 This is the car as of Saturday night﻿
Posted by Greg at 11:58 AM No comments:

My Coker Classic 2-1/4" white walls arrived this past week and I was able to get my wheels painted to match the body color of the car. I can't wait to get these mounted up and on the vehicle.

I did a 3 part series on how to paint your wheels the professional way. This is not as expensive as most people would think. It's about $50 for a quart sprayable of urethane basecoat and about $30-50 for the clearcoat. I used Matrix MPB (Matrix Premium Basecoat) Gecko Green Metallic for the color and MS-42 High Gloss Urethane Clearcoat. I bought the base and clear from http://www.anotheroptionpaintandbodysupply.com/ 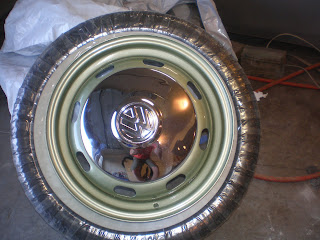 Wheel sitting on the new tire with hubcap

I sandblasted the top frame this week. After that was done, I fabbed up the intermediate bow that was missing from the frame. Once that was welded in and operational I coated the frame with 2 coats of DP-90 then top coated with rattlebomb black. I think the DP will provide the durability, the rattle bomb was just a bit of UV protection for the DP.

I was also able to get the doors hung on the car. It feels like it's starting to come together. 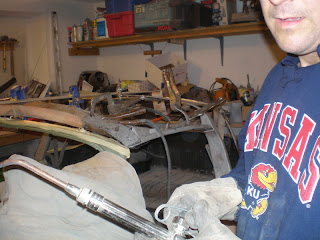 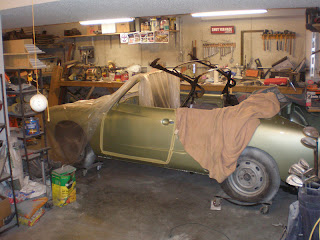 Doors on and top frame installed

Body Back on the Frame

My dad, my uncle Gordy, my friend Damon and my wife's uncle Scott came over after the rain let up on Saturday to lift the body back onto the chassis. The operation went almost too smooth. 5 minutes of rolling the car out and about 30 seconds of heavy lifting and the car was re-married to it's frame. I prepped the frame by using seam sealer to stick the pan gasket into place and cutting holes in the gasket with a razor blade. The pan bolts will probably go in and come out half a dozen times while we shave down the bushings on the front and back ends of the car. Hopefully the doors will fit correctly and the world will be a happy place once again. 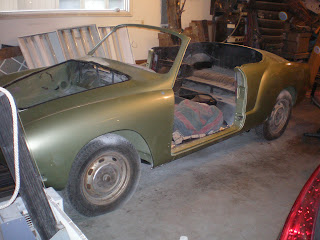 I stripped all the POR-15 off the floorpans last weekend. The stuff just doesn't hold up like you would expect it to. I have decided I will never use a single part paint on a car again. Also, I will never fall for the "you can paint right over the rust" snake oil pitch again. If you have rust on a car, you have to remove it!!!!!!!!! Just like weight loss, there is no magic bullet, no magic pill, no magic potion to point and click the rust away. It takes hard work, elbow grease and abrasives to remove unwanted corrosion.

I chose to use U-Pol Raptor liner on the pans since it has a hard surface with some texture to it. I was much happier with the texture on the pans vs the texture I got in the wheel wells. I was able to hold the gun back a bit further and I got very even coverage. I used a bit more hardner than directed so the material came out of the gun with a much smoother texture. It took 1 liter per coat to do the pans. I bought a 4 liter kit, so I still have 1/2 of the material left. I may spray the inner quarter panels and the rear luggage areas, I'm not sure yet. 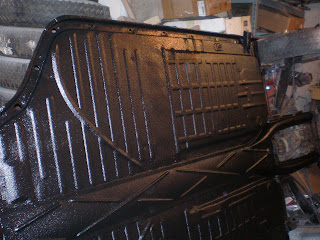 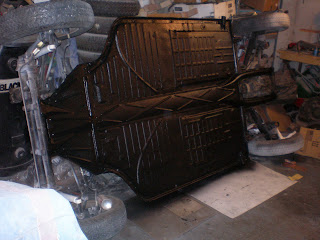 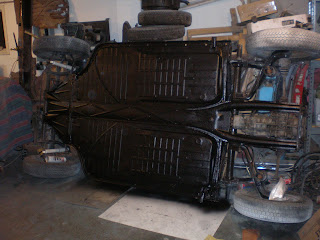 I took a two week vacation from work so I could get the car painted. I hoped to have it prepped and ready to spray last Friday. I spent around 12 hours a day Thursday through Monday getting the car sanded to perfection. The nose and right fender both had hairline cracks in the primer right at the body lines. I wound up grinding out all the bodywork on the 3 inches both sides of the nose ridge to make sure whatever caused the primer failure was gone. That meant completely redo-ing the bodywork on the toughest part of the car in a day. As I was washing the car for the final time, I noticed the crack in the fender. It was about 1/8" long and barely noticeable, but still it needed to be sanded and fixed so it would not translate up through the paint.

The paint day was ridiculous. I started working at 5:30 a.m. emptying the garage and getting everything clean. After the cleaning my dad came over and helped me hang plastic, mask the car and get the lights set up. I started painting at 1:40 p.m. From the time I started painting I was non-stop busy. There were a couple quick water breaks, but that's it. I laid down sealer on everything, then started laying color. I base coated all the parts. Somehow I did not get the gun perfectly clean between sealer and basecoat. The first coat of base had trash from the gun splattered all over the left fender. A quick call to a hotrod builder in Arizona gave me the tools I needed to fix the troubles and continue the paintjob. I took a piece of 1500 grit and some grease and wax remover as a lubricant to sand out all the goobers. I would guess there were 25+ areas that I had to fix. After the next coat of base, you couldn't tell there were any problems.

I had issues with the hood, fuel filler lid and license plate light bar. All the parts that had been previously painted. It wasn't the existing paint it was just coincidence. A bug landed in the hood after the clear was down. I got runs in the base on the other two parts and had to sand them down to the sealer... It was a mess and I'll probably paint them again.

Yes, there are a couple sags and some orange peel in the paint, but all in all it looks really good. 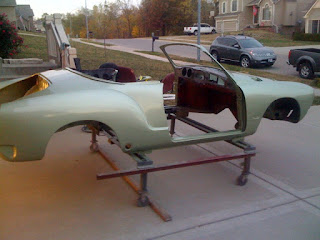 Car in paint and outside 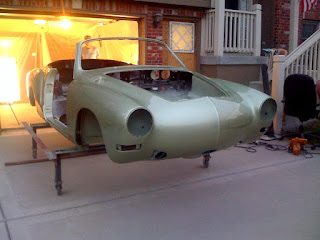 Now that I see it, I am really glad I filled in the grills
Posted by Greg at 1:33 PM 2 comments: