After removing the 1/4" of bondo from the rear apron, I went about straightening out all the dents the the PO's body guy decided to leave in the metal. It truly looked like it had been hit by a hail storm of different sized hammers. The funny thing is that it was welded to the quarter panels on both ends, so that means it may have been off the car at one point or another.

I spent about 15 minutes using my new slapper and my dolly in the bench vice. That combination took care of a huge amount of work in a very short time. Since the slapper is so wide it's able to create a much larger area of refernce when compared with my favorite body hammer. I think the slapper will quickly become my weapon of choice when first attacking dents and dings.

After the slapper, I turned to a combination of the planishing hammer and my hand hammers. I hit the dents from both sides and got everything close to where I wanted it. After things were decent, I spent about 5-10 minutes on the english wheel with a fairly flat lower anvil getting some of the finer dents and dings worked out. After the e-wheel I hit the whole piece with my DA and highlighted all the low spots. Another 10 minutes tapping with my hammers and the piece is just about ready to be reinstalled. I have a bit of welding to do where the metal tore, but the pieces is 95% complete and looks really good.

The next step to getting the rear end straight will be reinstalling the decklid and cutting the right quarter loose so I can get the gap adjusted. I have been running into a lot of situations where I have no references from which to measure. This is true for the rear of the car. I don't know if it's out of square and since the whole thing from the wheels back has been hacked up, I decided to find the center of the car and start from there. I set a string line on the nose ridge, then hit the center of the cowl where the windshield squirter sits, then the center of the engine bay between the rear hinges. From there I eyeballed the center of the engine bay. That should get me within about 1/16" of center. Hopefully I can run a few other strings and find a line perpendicular and use that combo to measure distances for bits on both the left and right sides of the car. 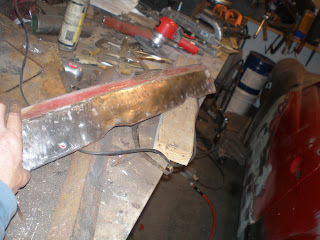 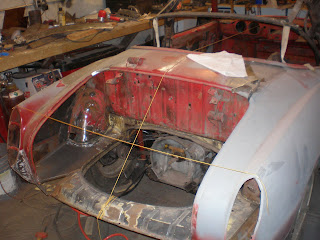 Vid of the apron work