Blocking and some paint

It's nice to have help once in awhile... My wife's uncle Scott came over to the garage for a couple hours to help knock down bondo, strip off the JP-205, push out a few dents and drain a couple beers (buying beer beats the hell out of paying a $50/hr shop rate). It seemed like we were able to do 3x the work with only two guys.
While Scott was sanding the doors and fenders, I was busy working on the front hood, fuel filler lid and license plate light/decklid handle. I found more panel damage from the sandblasting and made a promise that I would never again sand blast a panel with structure behind it. After some block sanding, it was evident the hood had low spots around the perimeter where the structure pushed while it was being blasted. The spots weren't deep, but still required a lot of work to smooth out. I had one spot that was close and I wanted it to be perfect, so I stuck the hood in the e-wheel for some smoothing... BAD IDEA! I accidently went too close to the edge and pinched the structure below into the panel and created some deep grooves... I wound up having to fill in the area rather than metal work it. 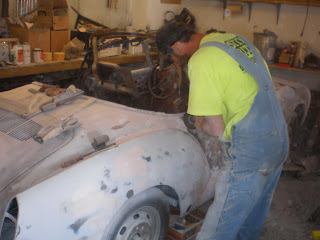 Unkie Scott grinding out some filler 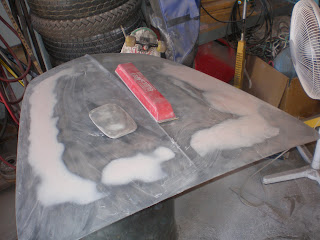 The bodywork on the low spots 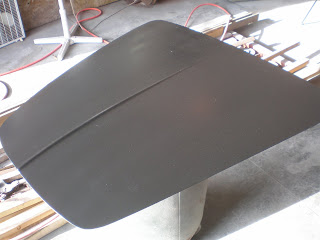 The hood after a couple coats of epoxy primer 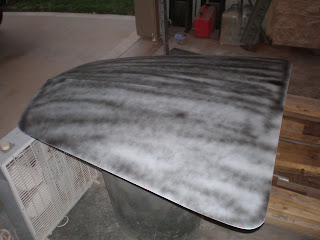 4 coats of Matrix MP3-HS Urethane Primer and a guide coat
Posted by Greg at 6:49 PM