It's been awhile since I posted anything up. I had some trouble getting the driver's side door perfect and found out I had a bad lower hinge. I originally thought I needed to finish welding some pieces around the dogleg to eliminate the play that I had in the door. After a few hours of pushing and pulling on the door with my father we isolated the trouble to the lower hinge. Thankfully I had two others in my parts bin and as soon as I put on the good one, the door swung perfectly.

Cut to the passenger side door... A bit of a back story. The car has had both rear quarters replaced due to a rear end accident. The engine bay is a crinkled mess (I have a nice one ready to drop in) and there are other signs of damage all the way up to the b-pillar. When I drove the car back in the 90's the passenger side door always dragged on the rocker scuff plate at the back end of the door. I didn't know enough back then to figure out how to fix the problem. Was it a bad hinge, poor geometry or something else? Well, today I set out to get the door hung and find out.

I phoned my dad to help hang the door. This is WAY easier with two people, but it is possible to do it alone. We bolted up the hinges and when we swung the door closed, the top of the back end of the door was about 1" (one inch) lower than the top of the rear quarter. It was going downhill from the front of the car to the back. We both scratched our heads for awhile trying to figure out how to get the geometry of the doorframe back in alignment with the door itself. We had to take a break on that note and head off to a family gathering.

At the gathering, I chatted with a couple uncles and my wife's grandfather. We all agreed the car was racked and needed to be straightend and braced before the rockers get removed. When I got home I grabbed my floor jack and stuck it under the door hinges and raised it up (what did I have to loose?) Low and behold, the back of the door raised up in relation to the rear quarter. I opened the door and stood on the back of the rocker to make the flex a bit more permanent. At this point, I installed the striker to see if I had spread out the b-pillar with the jack under the front... Wouldn't you know, the striker wouldn't reach the door latch.

I called my dad back to see if he could prevent me from doing something stupid. Good thing he only lives about two miles away. He came over and assessed the situation. We both decided we should put another jack under the very rear corner of the quarter panel to close the gap at the b-pillar. With a few more stands on the rocker and some jostling the door gaps looked good and the door closed effortlessly. Before we let if off the jacks, I welded in some braces behind the door so the geometry would be locked in.

My next move will be cutting out and welding in the passenger side rockers. I am planning to leave the door in place for this operation so I can confirm the gaps will be perfect at the end. 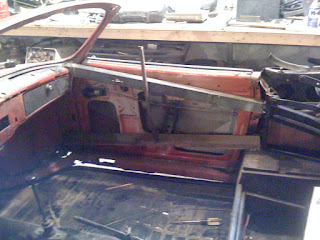 Braces holding the doorframe in the proper alignment.