I had a change of plans yesterday. No sandblasting. As I was looking at the patch Cecil and I made Friday night, and contemplating welding it in, I noticed how easy it would be to fix the hole in the luggage compartment with the access from above. I set about making a patch and cutting out the bad spots in the wheel well and the luggage floor. After about an hour and a half I had a good fitting patch and I was ready to weld. About 1/2 an hour of welding and I am ready to grind everything down...

I still have some patches to weld in from the other side, but I will do that at a later date.

With the welding done, I decided to coat the other exposed areas of the wheel well and inner structure with POR-15.

After the painting was done, I called in my wife's uncle for some help installing the decklid so I could check out the gaps before committing to welding in my patch. It's been about 10 years since I've had the decklid on. The top gap was good, but both sides have a pie shaped gap that is wide at the top and looks good where the hood turns from horizontal to vertical. I'm not sure how to deal with that. I'll have to figure that out later. 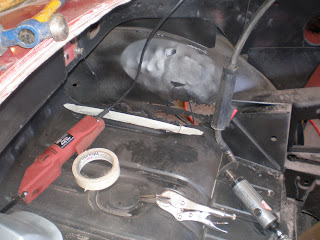 Holes in the luggage 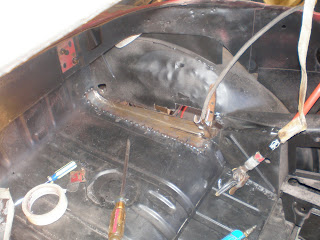 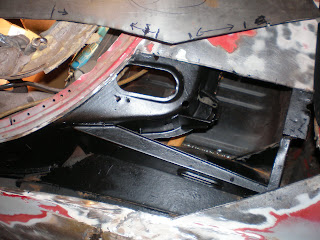 I POR'd all the reachable metal under the patch I cut out. 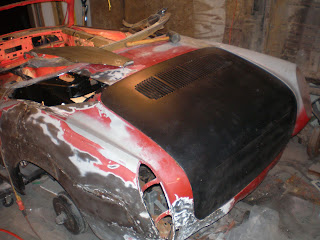 Decklid back on the car
Posted by Greg at 5:20 AM