This was probably the most stressful day in the entire restoration. Paint is always a bit nerve racking for me, but this was over the top. I had a bit of welding and grinding to finish up this morning before I moved to painting.

I hit Home Depot at the crack of 8am for painter's plastic, steel wool, and a couple small items. The plastic I bought was a roll of .35 mil 12'x400' for $24. I also dropped by my dad's house to pick up a box fan. I added a handful of thumb tacks and that was my paint booth for the day. Sorry, I didn't take picks, but it's in my video.

After the Depot, I hit the final wheel arch welds and ground them down. Wouldn't you know it, my welder was very tempermental, and almost pooped on me durning my last few welds. Thankfully, it held out. I was done with the welding and grinding about noon.

I started to DA the entire car thinking it would take about 30 minutes... WOW, that's a huge job. I spent about 2-1/2 hours and went though about 15 discs of 80 grit. When I was done the car looked great. I wire brushed the weatherstrip channels and all the weld beads to make sure I got all the surface rust that was on the car.

After the DA, I hit the whole car with "Pete's Pickle Juice" and steel wool. Pete from Southwest Rod and Custom said that you can buy the metal prep from PPG for about $25 a gallon or you can buy a $2 bottle of white vinegar and add it to water... It's the same thing except for the blue food coloring. The vinegar turns spots on the car a gold color. I suspect it's some sort of impurity, I don't know. I wiped one fender at a time, then rinsed it off with a hose, then dried with paper towels, then hit it with the hose again. I've never done that step before, so I hope I did it right...

Once the car was hosed down and dry, I hit it with Final Prep (wax and grease remover) from Carrol Brothers. It's the same thing as PPG DX 330, but a heck of a lot cheaper. The panels were so clean they actually squeeked as I dragged the Torx paper towels over them.

After the final prep, I pulled the car into the garage and began building the cacoon out of the painter's plastic. Once that was done, I poured a bucket of water on the floor and started the box fan. Then it was time to start mixing paint.

I had two quarts of 402LF and one was no longer a liquid. Apparently, that stuff has a shelf life... The one that was still liquid, was amber in color, which happens with age. I used some DTV reducer and the mix was 2 parts dp90, 1 part 402, .5 parts DTV. This makes a fairly thin sealer that's easier to spray than straight DP. I used a Devilbis Starting Line HVLP gun. This was the first time I really put this gun through the paces.

Once the paint was in the gun (I forgot to strain it, I'll cover that later...) I turned the pressure regulator/valve at the gun to 0, pulled the trigger and slowly opened the regulator until the gun was about 10 PSI. I used a small, round pattern since that seemed to give me a lot of control. The gun performed like a dream! I couldn't believe I was laying paint down that smooth. I did get a couple sags because I lost my concentration for a bit, but all-in-all it looks good. When I got to the end of the first gun full, the paint started to spatter a bit and I couldn't figure out why. It only lasted a little bit and it was time to refill. I refilled and the paint was back to smooth again. At the end of the gun, same spattering... Duh, the paint wasn't strained through the filter... I won't make that mistake again.

I finished cleaning up from the primer/sealer at 7:30p.m.

Things I learned... Give yourself PLENTY of room to work. My cacoon was too small. I needed 2'-3' more room on the sides of the car than what I had. Also, I tripped over the platic in a few places and it came down. There was almost no overspray with the HVLP gun, so not having the plastic wasn't a huge issue. I barely squeezed this job in today and I was hoping to get polyester surfacer on as well... I didn't give myself anywhere near enough time to get everything done, so I was rushed and frustrated by the end of the job. The car is supposed to be a fun project and the stress level today did not make it any fun at all. The results are kick ass though!!! 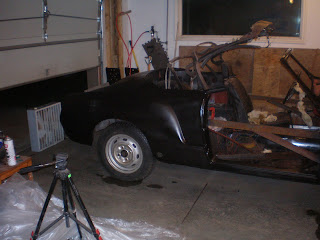 Rear of the car 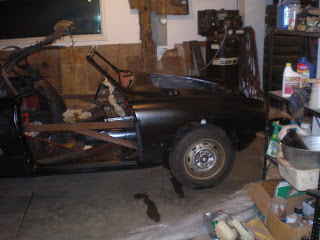 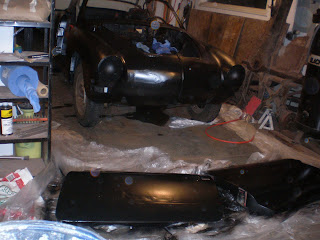