My last official day of vacation and I checked off the last item on my todo list! I got the car coated in PPG JP205 polyester primer/surfacer. I don't have any experiece with this stuff and it was a bit of a challenge setting up my gun to get it to shoot properly. It is THICK stuff. I bought a gallon and I was planning to use about 3/4 of it. I managed to put the stir stick into the gallon can AFTER I stirred some hardener into a batch in a mixing cup. After that, I figured I better use the whole gallon or it would probably be rock hard the next time I went to use it.

It took me about 8 trips around the car to use up the whole gallon. I think I had the gun set too thin to start with, so I thickend up the mix and I was draining guns in about 10 minutes. I also shot both doors and the deck lid. I was going to shoot the hood too, but I wrapped the edges in packing tape a year or so ago and when I went to take it off, it left adheasive all over the place. I tried to wipe it off with thinner and cleaner, then tried to sand it off and went right through the epoxy... The hood is about 100% so it shouldn't need a bunch of primer/surfacer. I'll probably shoot it with a 2K primer later on.

The whole house stinks like bondo. It's 50 degrees and we have all the windows open. Hopefully it burns off soon!!! 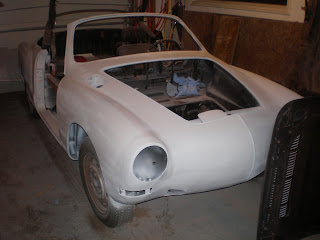 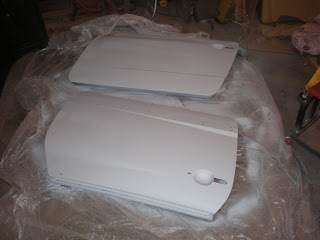