I have been stuck for a few years trying to figure out how to make the reverse curve for this filler panel. I thought I had it figured out last night, but after an hour and a half, I gave up. The short direction contour is pretty slight, but the long direction is the same curve (close to it anyway) as the nose section. I kept getting the ends to look good, but the middle 1/3 of the patch was either flat in the short direction or the sheet metal was contoured the wrong way... I went to bed frustrated and decided to think about it later.

When I got up, I looked on YouTubes for a reverse curve video and found a couple that used a special die and a planishing hammer. John Kelly had a method for using a shrinking disk. Well, I don't have all the pieces for either of those setups, but I do have a HF e-wheel. The video with the dies and hammer told me what I needed to know: You have to stretch the edges of the panel in the long direction to get the long curve to appear. John Kelly does just the opposite, he shrinks the center of the panel. Either way, I was stretching the center of the panel and there was no way that would ever work!!!

I set out tonight and curved the patch to meet my template in the short direction. Then I wheeled the bajesus out of the long edges of the panel (see pic below) and started to see the long curve form. After 10 minutes of wheeling, the patch met both curves from my template, so it was time to stop and trim the panel to fit the opening. 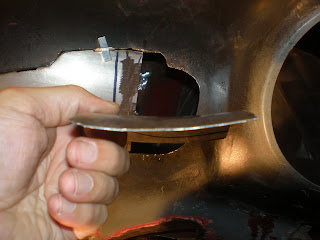 patch with reverse curve (as slight as it is.) Notice the panel is curved down on the leading edge, through the center and at the back. This is critical to check all locations. 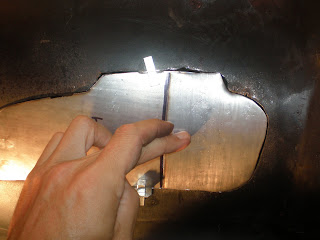 Patch held in place. It's difficult to see, but it's spot on where it meets the body and the other patch (I feel like I know what I am doing again!) 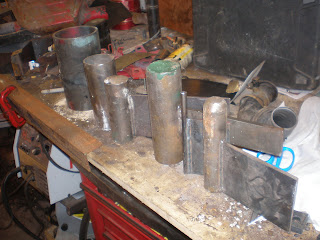 A few of my post dollies and tubes I use for bending and beating. I get all the metal out of the scrap bin at a place called Metal By The Foot here in KC. Works out perfect, the scrap is cheap and sized just right. 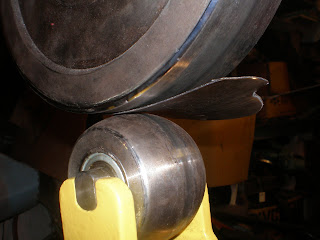 Hard to see, but the short direction curve is pointed down like a frown. The long curve is up like a smile. This was AFTER I trimmed the patch, but this is how I wheeled the edges. I used fairly heavy pressure.
Posted by Greg at 7:16 PM