I decided to try a chemical stripper on the front fenders today. Everything I read said to let the stripper work for you. One guy said put it on and get some lunch, come back and take it off. Another guy said let it sit 4-5 hours or over night. I don't know what brand of stripper they used, but I found out the hard way not to let it sit that long.

I spread on the stripper (Bix) the way I was told: dump it out of the can, brush it LIBERALLY in one direction only. I let it sit for about an hour and a half. I dug up a test bit and saw it was down to the original primer. I let it sit a bit longer and decided I needed to get after it because I had limited time to work before I needed to leave. As I was scraping off the paint, I realized that if the stripper drys up, the paint starts to re-solidify.

I used both a razor in a holder and a putty knife to scrape off the paint. After I got off all I could that was still wet, I hopped in with a razor to clean off the dry stuff. 3 hours later I had a clean fender. I bet I scrapped 9/10 of the paint with the razor... Not the result I was after. I cleaned up the fender with a DA and 80 grit paper. I also started in on the right fender, just scraping off the top crust. WHAT A PAIN!!! I be faster next time.

I got home from dinner and worked for an hour with the razor scrapping paint off the right fender. I will try more stripper tomorrow and see what happens. 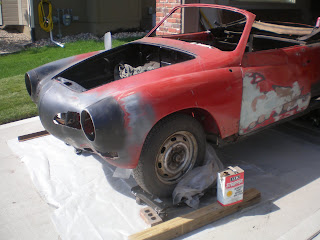 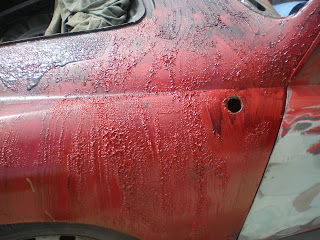 Paint bubbling up after about 15 minutes 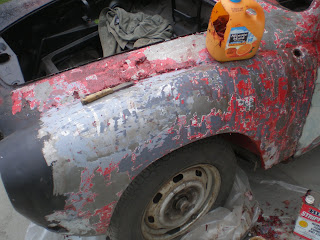 Scraping off the paint 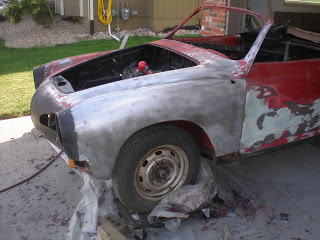 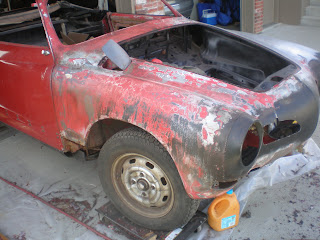 The side that dried. Even with a second coat of stripper, this was all I could scrape off
Posted by Greg at 8:22 PM