I spent two hours blasting the top of the hood today. I changed out nozzles on the blaster for the first time ever and it slowed me down substantially. It took the pattern from about 1" wide to about 1/4" wide. It was like taking the paint off with a pencil eraser. The new tip allowed the compressor to keep up even when the blaster was running wide open.

I reused about 100# of black diamond media from yesterday. I scooped it into buckets at 2:30 a.m. because I was having insomnia. For once my insomnia paid off. About 10 minutes after I put the slag into the buckets and brought it all inside, the skies opened up and it rained for 3-4 hours... I spent about an hour sifting the media and getting all the rocks and metal chunks out. I put a big welding magnet into the funnel so when I poured the media in, the magnet collected all the little metal pieces. I was surprised how well it worked. I had one clog at the very end of my blasting and it was a really small piece of metal.

I've been told black diamond/black beauty can only be used effectively one time. Maybe that was the reason things went so slowly. Who knows. I'll find out next time I am blasting.

Tomorrow I'll shoot DP90 in the luggage compartment, on the hood and hopefully on the new headlight buckets that I have had sitting around for a year in plastic bags. 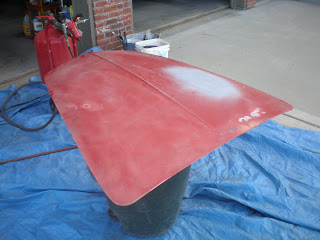 Hood prior to blast 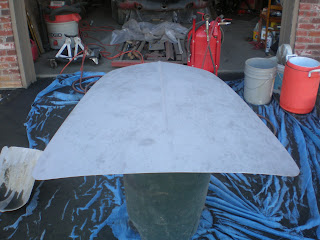 Hood after blasting and 100# of slag on the ground